Of Caves, Rocks and Fossils- Another View of Creation

What can you possibly do to match the insanely diverse day in Kentucky that included the birthplace of Kentucky Fried Chicken, The Birthplace of Lincoln, and the Birthplace of a ton of new ideas about our origins?  You just keep the wackiness coming.  And we did.

One of the actual destinations on our spreadsheet/map combo was Mammoth Caves…which as I explained, caused us to drive a couple of hundred extra miles out of our way to see the Ark and then back to Cave City near Mammoth Caves. But rising early for an 8:30 “Tour Time” at the Mammoth Caves National Park (yes…I got my senior discount), we were in line with more than enough time to spare, and headed into the mouth of the “Gothic Tour” (named for the particular branch of the caves, not some dude with black clothes and eye shadow).

Now…we have been to caves before. And Oregon Caves just a bit West of Grants Pass, is truly breathtaking. It isn’t nearly as large as other cave systems…but, it is beautiful, even if we come off as being biased.

Well….it is MAMMOTH!  It is the largest single cave system in the world (as far as the systems that have been discovered). With over 450 miles of interwoven caves, and perhaps as many as twice that in unexplored, uncharted caves being predicted by scientists…it is the biggest. Period.

There are loads of stories associated with this cave system, but the most interesting was that of one of the best-known early cave guides, named Stephen Bishop. He began exploring the caves in 1838, while still a slave to a wealthy Kentucky doctor. Bishop was known for exploring and discovering more than 200 different miles of the cave system, until his death in 1856. It is thought that he died of Tuberculosis, as his owner had proceeded him in death by several years by the same ailment. Upon the Doctor’s death, he had a stipulation in his will that all of his slaves should be freed….after seven years. Nice guy. As it turns out, Stephen had one full year of life as a “Free Man.” He was ironically more free, when he was entombed in the bowels of the massive cave system.

Again…the caves were Mammoth….and dark. I didn’t really get any great pics inside at the low light levels…but got some video, which I may post at another time. 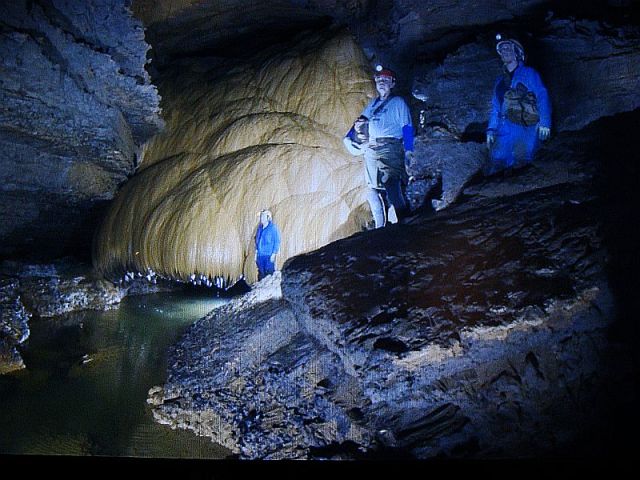 A graphic and modeled view of the extensive caves that weave through the area. 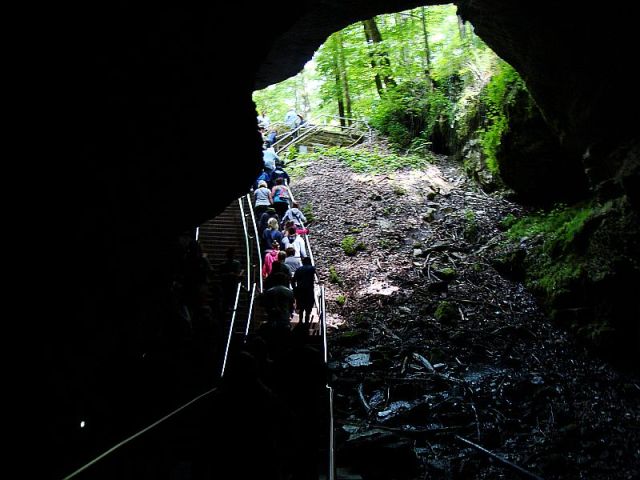 Leaving the cave is the same to the entrance. 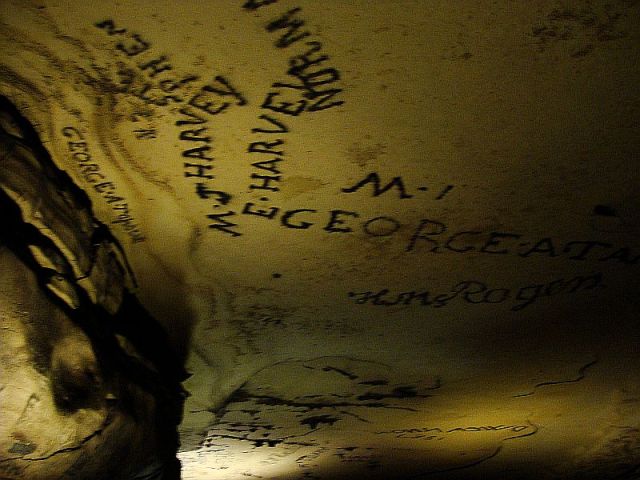 One of the strangest anomalies is the effusive antique/historic graffiti throughout the caves. In the early days, it was part of the attraction to be able to “sign your name” using candle smoke daubs onto the ceiling on the cave…taking hours to do in such perfect lettering. There are signatures that go back to the early 1800s. 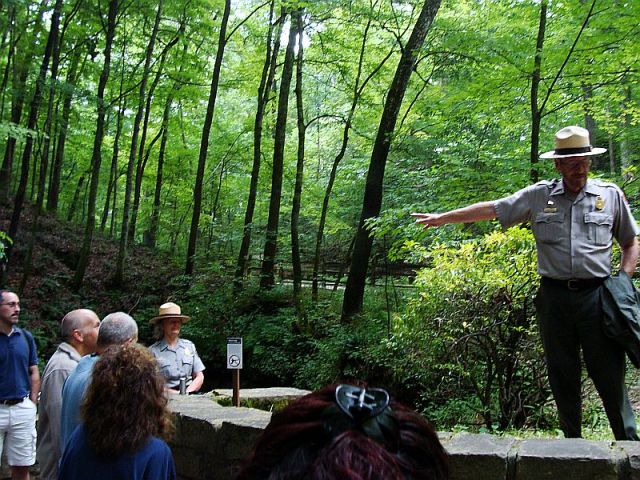 At the end of the cave tour, we needed to do a “Bio Bath” to protect the bat population which has been decimated by a fungus recently.

The most confusing thing to Deb and I was that we had spent the entire day prior at the Ark Experience “getting our heads right.”  And now…we had displays, and an officer of the Federal Government (the park ranger guide), telling us that the earth was waaaaaaaay older than 6,000 year, as the Ark Experience proclaimed. In fact, there was loads of evidence that would have us believe that the earth was actually BILLIONS of years old. That is a big difference!

We loved the caves…but couldn’t shake the feeling that Oregon Caves are prettier.

But we also couldn’t shake the whole, “The Earth is very, very old” bit at the next two stops, “Big Mike’s Rocks” and “Dinosaur World.”

Big Mike’s is one of about a zillion roadside attractions between the highway and the entrance to Mammoth Caves (including some competitive caves, several zip-lines, bumper cars, and a miniature golf place…all in just 4 miles of road.

While “Big Mike’s” was a bit suspect in its gradation of history (selling glass chips and colored rock shards right next to fossils), they did a pretty good job of explaining how old these rocks and fossils were. They are waaaaaaaaaaay older than 6,000 years old.

We then had to stop at “Dinosaur World.”  While this place is clearly focused on a “kid friendly” (and dog friendly) experience, with the ability to mine for fossils, and uncover a dinosaur skeleton, it has a “museum” (mostly castings and charts) that once again, makes it pretty clear that all of the real action happened waaaaaaaaaaaaaaaaay longer ago than Ken at the Ark Experience would have you believe. 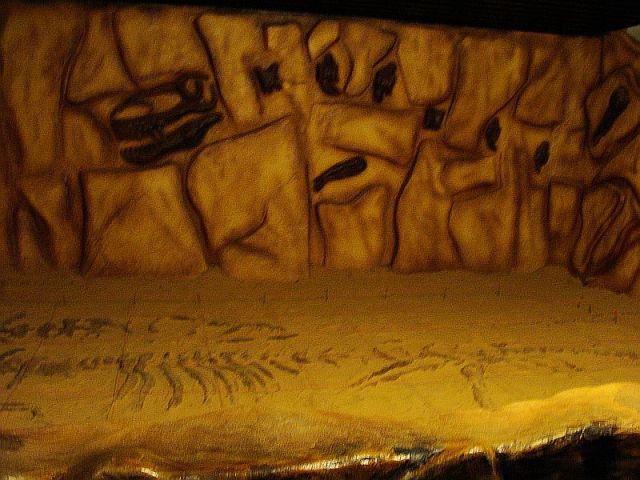 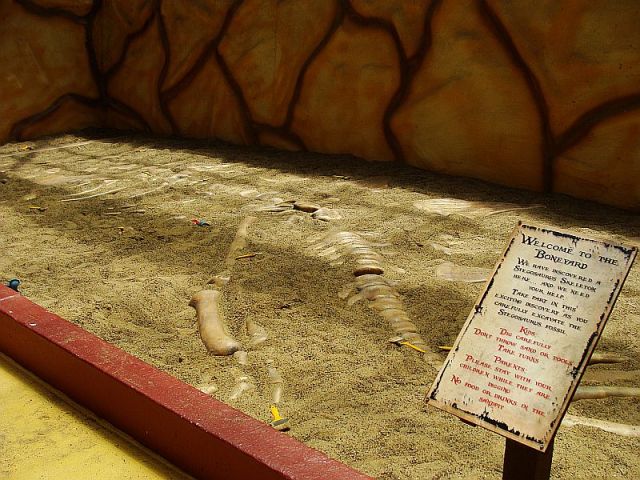 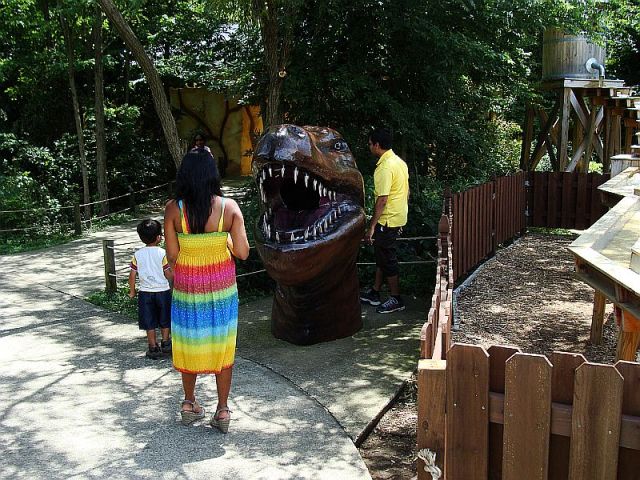 And when you get close to these life-size beast in their “natural environments” (with trash cans conveniently placed at helpful interval on the trails), you have to start thinking that maybe Ken was wrong. Whatever the case…I wouldn’t want to be hanging around these guys after they were let out of the Ark. Really. Not kidding.

Once done with everything that peaked our interest in Cave City (and because “Bucky  Bees BBQ” was closed on Sundays, we pointed our “time capsule” back up the freeway, toward the town of Greensburg, Indiana… a scant 265 miles away…making our backtrack loop a mere 500 extra miles…because we wanted to be one of the first to see the Ark (which clearly let us down as it pertained to establishing a real substantiated record of the beginning of the Universe).

We arrived in Greensburg, around  6 PM…just in time for the County Fair Parade…and a jump back to a simpler, perhaps happier time…before the Internet ruined it all.

I'm a very complex person...no...really I am. It may seem like I only golf, watch TV, and listen to Randy Newman, Tom Waits and Little Feat...but I am a deep, deep thinker...so deep that at times I just have to lay down. I love my family. I love my wife for putting up with me. I have held more jobs than a Pakastani immigrant...and have had three complete career cycles. 1. In my first life (rymes with first wife) I did almost every blue-collar job you can imagine...all with alarming ineptetude. 2. In my second cycle, I owned an ad agency, was an award winning music producer, and recording artist. And now, since the advent of the Internet... 3.I have been pretty much locked into providing services and marketing support to radio stations across 160 markets...while dablling with writing...continuing to write music...managing several blog sites, the country club web site, and being a grandpa...while working to pay for the weddings of my last three daughters. I will be working until I am 70...or 75...or 80. My advice to anyone who wants to emulate my life... DON"T!!!!! Stay in college. Have a good, long career in something with a decent retirement program and good benefits. You can't pay for your gallbladder operation with an Emmy Award. Really. I've asked.
View all posts by crankyoldguy067 →
This entry was posted in Rediscovering America and tagged American Society, Blog Rants, Bucket List, CrankyOldGuy, Crankyoldguy Podcasts, Dinosaur World, Mammoth Caves, Patric J. Miller, Rediscovering America, Route 66. Bookmark the permalink.